Richard Hight is an international speaker who inspires audiences to re-imagine possibilities and discover their creative processes. He understands the importance of utilizing his presentation to motivate the crowd, and he uses a variety of learning methods to connect with every individual in the room though spoken word, music, and fine art.

From the moment Richard steps onto a stage, he captures the attention of each individual by combining powerful illustrations, compelling music and inspiring messages, to challenge people to think like an artist and act like a leader.

Read More
Richard Hight Profile
Richard Hight is an international speaker who inspires audiences to re-imagine possibilities and discover their creative processes. He understands the importance of utilizing his presentation to motivate the crowd, and he uses a variety of learning methods to connect with every individual in the room though spoken word, music, and fine art.

From the moment Richard steps onto a stage, he captures the attention of each individual by combining powerful illustrations, compelling music and inspiring messages, to challenge people to think like an artist and act like a leader.

On stage, he will encourage the audience to expand their creativity, and the message is shared through an interactive visual display of art. The audience will be astonished as they watch a beautiful image revealed, as Richard uses his artistic talents to create an amazing original illustration within minutes.

Don't settle for another dry event because Richard's presentations can bring the WOW factor to your group. His unique visual style is unlike any presentation that you have experienced, and his on-stage artwork is an integral part of connecting with crowds so he can share simple yet timeless truths. Calling Richard a "typical speaker" is like saying that VanGogh was an "average painter." Through the art demonstration and the motivating speech, he helps people to see their own life as a work of art, so that they can find the unique brilliance that sets them apart in the world.

As a Certified Speaking Professional (CSP) through the National Speakers Association, Richard enjoys educating, entertaining, and inspiring on stage. His presentations can be catered to appeal to any demographic and he is skilled at tailoring the message to fit your audience, which means that your event will be personalized based on the needs of your organization.

Residing in Tulsa, Oklahoma, Richard travels the world and has shared his messages with millions of people. He has appeared on CBS, NBC, ABC, and FOX networks, and his artwork is placed in museums and over 50 universities around the country. In his spare time, he enjoys spending time with his family, fishing, the theater, reading, and music.

Richard is a dedicated husband to his wife, Marty, and a loving father to his two children, Averie and Coleman. As a family, they have actively supported Averie, who has Down Syndrome, in Special Olympics. 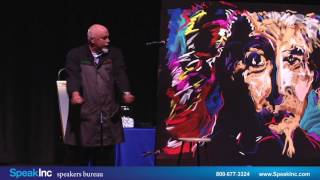 The Masterpiece In You

The Masterpiece In You
Discovering, Developing and Delivering Your Talents This is a keynote performance that brings art, music and the spoken word together to inspire individuals to achieve fulfillment in their personal lives and challenges organizations to implement creativity and innovation to accomplish their vision.

The Masterpiece In You is a journey in personal growth in finding fulfillment with your gifts and talents by combining visual arts and the spoken word together to create a potentially life-changing experience. Richard Hight is a masterful artist and an internationally sought after inspirational speaker. Using warmth and humor, Richard is renowned for, artfully drawing from his own canvas to deliver the ideas and attitudes you need to create your own masterpiece. Understand that while your circumstances may determine the colors that you have to work with, the choices that you make day-to-day are in fact, the brushstrokes that will define what your masterpiece looks like. Richard's Masterpiece presentation is a palette of timeless lessons and entertaining stories including:

Applied Imagination
Leading from an Artist's Perspective
Everyone has an idea, but not everyone makes their idea come to life. Following through and bringing an idea to fruition is the hardest part—and it's what separates the leaders from the rest of the pack. The source of ideas, we call Imagination; the drive to make them real, we call Applied Imagination.

This keynote shares the teachings of leaders and peak performers who applied themselves, who stuck to their idea and used it to make a difference in the world. As much as Applied Imagination is a parable of persistence, it is also a lesson in thinking outside of the box, changing the game, and choosing to lead. Your idea is waiting… apply today!

Richard Hight is an international speaker and artist whose work is housed in over fifty museums and universities around the country. He discovered his love of drawing while struggling with dyslexia in school, and has been producing art and engaging audiences ever since.

In his presentations, Richard focuses on helping audiences to re-imagine the possibilities in store for them and to engage their passions and natural talents. His presentations focus on the power of creativity and all of its applications, be they the arts, business, or everyday problems.

His programs combine the spoken word with compelling music and a live, visual demonstration where he creates (in full scale and color) an original piece of art, reflecting both the audience and the major themes of your event. His presentations appeal to all demographics, and he can skillfully adapt his programs to suit your needs.

To call Richard a "typical artist" would be akin to calling Lincoln a "typical politician." His visual style, depth of understanding, and ability to engage audiences are unparalleled; he brings the "Wow Factor" in full force to every one of his engagements. Through his words and demonstration, he shows audiences that their lives are works of art unto themselves, and therefore set apart in brilliance.

Richard has been named a Certified Speaking Professional (CSP) by the National Speakers' Association, and has appeared numerous times on CBS, NBC, ABC, and FOX networks to discuss his work and perform demonstrations. Richard has also launched numerous international tours and shared his work with millions of people abroad.

When Richard is not traveling, he resides in Tulsa, Oklahoma. In his spare time, he enjoys attending the theater, fishing, reading, and playing music. He is a dedicated husband to his wife, Marty, and a loving father to his two children, Averie and Coleman. As a family, they have actively supported Averie, who has Down Syndrome, in the Special Olympics.

Imagine That!
Creative Problem Solving and the Artist's Perspective
Richard skillfully stretches people's perceptions to see new possibilities and experience how their own imagination works."

Successful people take advantage of emerging opportunities; successful people also seek better solutions for their ongoing challenges. In both cases, creativity is the crucial ingredient. Creativity requires a broader and more imaginative way of thinking, but it's open to all and it can help anyone, whether they're a student, a businessperson, or anything in between. And creativity isn't just for fancy projects—it's for everyday life!

Whether your audience needs motivation, inspiration, ideas, or solutions, Imagine That! will put the power right back in their hands. There is an artist in each and every one of them that will make them better at what they do, if only they have the will to imagine.

This keynote is designed to reawaken your audience to become a more creative thinkers, so they can:

•Develop and fully develop new answers to problems that once seemed unsolvable
•Become more persuasive in the presentation and marketing of their ideas
•Avoid over used solutions in favor of novel ones that set the stage for even greater success
•Strengthen their leadership abilities and organizational skills, and
•Attain new levels of fulfillment in daily life – personal transformation
•Create strategies for turning change into opportunity

Whether your is in need of inspiration, or to re-evaluate their career with a fresh perspective, solve a complex business problem, introduce a new idea to the marketplace, or figure out the best way to resolve a tense situation, this keynote will present everything needed so that when peers are dodging life's challenges, you're uncovering the potentially successful opportunities that were missed by others.

Picture This!
The Vision of an Artist, the Attitude of a Leader
You're stuck. You've run out of ideas. Every door in your life seems to be locked. But what if, tomorrow morning, it could all be different? What if all it takes is vision—seeing something new, daring to color outside of the lines?

Richard Hight was once stuck. As an unassuming Oklahoma kid struggling in school, he never seemed destined for anything special, but for one ordinary day that would change everything about what he saw in life.

In Picture This! Richard shares his story with audiences whose hopes and dreams may be just out of reach. He shares insights that will open listeners' minds and shows them how to redefine leadership and vision in colorful detail. The keynote is accompanied by a live visual demonstration, choreographed to music and customizable to include your program's central themes and messages.

Picture This! provides the "Wow Factor" in plenty. Event planners call it an exceptional, high-value program, and it leaves audiences standing in amazement.