Last season, Bowden led UA to its highest win total since 2008 by going 5-7 overall and 4-4 against the MAC, as well as ending the year by winning three-straight and four of its last five games. The Zips went 3-3 at home, including a 31-29 win over Toledo in the season finale and a 16-7 victory over neighborhood rival Kent State to regain possession of the coveted wooden Wagon Wheel.

Read More
Terry Bowden Profile
Terry Bowden, who owns a 146-80-2 record over a 20-year collegiate coaching career, is in his third season at the helm of the UA program. He was named the Zips' 27th all-time head coach on Dec. 22, 2011, but is just the seventh person to hold the position since 1960.

Last season, Bowden led UA to its highest win total since 2008 by going 5-7 overall and 4-4 against the MAC, as well as ending the year by winning three-straight and four of its last five games. The Zips went 3-3 at home, including a 31-29 win over Toledo in the season finale and a 16-7 victory over neighborhood rival Kent State to regain possession of the coveted wooden Wagon Wheel.

In 2012, Bowden, serving as offensive coordinator, ushered in a spread offense that resulted in an aerial attack responsible for a school-record and MAC season-high 30 passing touchdowns. The offense, which was conducted in a hurry-up no-huddle style, was led by fifth-year senior transfer quarterback Dalton Williams, who set the program's single-season record for touchdown passes (25) and pass completions (326-for-522), while compiling the third most passing yards (3,387) in a season in school history.

Williams' arm was complimented by sophomore running back Jawon Chisholm's 953 yards rushing on the strength of 180 carries, and senior receiver Marquelo Suel's team-high 820 receiving yards off 76 catches. Suel's receptions were the second most in a single season in program history and earned him a place on the All-MAC Team.

Other highlights of the 2012 season include redshirt freshman kicker Robert Stein being one of 38 student-athletes named to the Academic All-MAC Team. Additionally, 11 Zips earned academic honorable mention from the league. Fifth-year senior transfer linebacker Kurt Mangum was selected to compete in the NFL Players Association Collegiate Bowl, after he led the squad with 110 tackles.

Bowden, who served as a studio analyst and color commentator with ABC Sports' college football for 10 years, was the head coach at Auburn from 1993-98 and spent the three seasons prior to coming to Akron at Division II North Alabama.

As head coach of Auburn, he went 47-17-1 (73.4 winning percentage) and posted the best opening, five-year run of any head football coach in school history. Also during his time with the Tigers, Bowden became the first collegiate coach in 50 years to win his 100th career game by his 40th birthday.

In his first season at AU, he became the first coach in Division I-A (now FBS) history to have an undefeated and untied season in his inaugural year at that level.

Prior to his stint at Auburn, Bowden built two programs from the ground up as head coach at Salem College (W.Va.) and Samford University (Ala.). When he took the job at Salem in 1983 he became the nation's youngest head coach in college football at age 26.

Inheriting a Samford program which had won just six games in three years prior to his arrival, Bowden led the Bulldogs to a 9-1 record his first year, tying the record for the best season in school history. The squad led the nation in total offense (523 yards per game) and scoring offense (51.7 points per game), both national Division III records. The team's 40 touchdown passes were also a national single-season record.

Bowden then engineered and directed Samford's move from non-scholarship Division III football to Division I-AA (now FCS) scholarship football. With only one freshman class on scholarship, the Bulldogs went to a full Division I-AA schedule in 1989. By 1991, Samford was competing for the national championship. His 1991 Samford team had the best record in school history at 12-2, and reached the Division I-AA national semifinals.

Bowden was named head coach at Auburn on Dec. 17, 1992. In 1993, Auburn had a perfect 11-0 record and he swept virtually every national coach of the year award in his rookie season, including Walter Camp, Scripps Howard, Football News, Toyota and the Paul "Bear" Bryant Award presented by the Football Writers Association.

Bowden was again a finalist for coach of the year following his second season at Auburn as the Tigers had reeled off 20-straight wins, an Auburn record, and finished 9-1-1. He posted a 47-17-1 record at Auburn and led the Tigers to three bowl games.

During his time away from coaching, Bowden first served as a studio analyst and color commentator with ABC Sports' college football coverage. He was also an analyst for Westwood One Radio's College Football National Game of Week, co-hosted "The Coaches Show" on Sirius Satellite Radio with Jack Arute, and was the exclusive college football columnist for Yahoo! Sports.

Bowden is a member of one of the most famous and successful college football coaching families. His father, Bobby Bowden, turned Florida State into a national champion and his 389 collegiate wins rank first in Division I history.

His brother Tommy had an 18-4 record in two seasons as head coach at Tulane and a 72-45 record in 10 seasons as head coach at Clemson, taking the Tigers to eight bowl games. His brother Jeff also has 25 years of collegiate coaching experience, working at Salem, Samford, Southern Mississippi, Florida State and most recently at North Alabama, with Terry.

During the decade of the 1990s, Terry, Tommy and Bobby all led their teams to undefeated seasons.

He did post graduate work at Oxford University in England, and earned a Juris Doctorate from the Florida State School of Law in 1982, while a graduate assistant coach with the Seminoles.

Bowden has five daughters (Tera, Jordan, Erin, Cori and Jamie) and one son (Terry, Jr.). He is one of 59 coaches at FBS schools that vote in the USA Today top-25 poll. 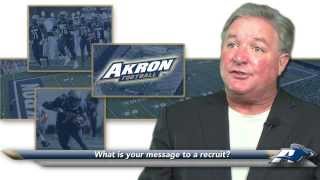 Win With Teamwork
A speech to emphasize the importance of performing as a team.

Audacity: The Belief That You Can Acc...

Audacity: The Belief That You Can Accomplish Anything
A speech that motivates employees to believe in themselves.

You Can Make A Difference