Philip was born and raised in East Tennessee, and it was apparent early in his life that he had a gift for music. His first public performance was at age four singing in church.

Winning a music scholarship guided him to attend the University of Tennessee, where he earned two degrees in vocal performance and music education. During his time at U.T., while performing in a local coffee shop, Philip was heard by the tour director for John Denver. This lead to his first performance as an opening act for a major artist in front of 20,000 people.

Read More
Philip Myers Profile
Philip was born and raised in East Tennessee, and it was apparent early in his life that he had a gift for music. His first public performance was at age four singing in church.

Winning a music scholarship guided him to attend the University of Tennessee, where he earned two degrees in vocal performance and music education. During his time at U.T., while performing in a local coffee shop, Philip was heard by the tour director for John Denver. This lead to his first performance as an opening act for a major artist in front of 20,000 people.

Philip continued his Masters studies in orchestral conducting with Robert Shaw and The Atlanta Symphony.

Upon finishing his formal education, Philip began his career in music as a staff writer at RCA Records in Nashville, where he wrote and recorded with some of the biggest artists in country music including Johnny Cash, Alabama, Vince Gill, Emmylou Harris, and Garth Brooks. His work in Nashville presented him with an opportunity to tour as an opening act for many of music's biggest stars including Elton John, Willie Nelson, Dolly Parton, Kenny Rogers, Ray Charles, and performing on stage with Don Henley and Celine Dion. Philip is a tremendously versatile entertainer, as evidenced by his ability to perform in many different genres of music from country to classical, pop, and Broadway. A veteran of many Broadway performances, Philip performed the title role of Jesus in the National Broadway Tour of Jesus Christ Superstar. Philip has also had the amazing honor of singing for four United States Presidents, (Richard Nixon, George W. Bush, Bill Clinton, and George H.W. Bush). As a recording artist, Philip has recorded six albums, featuring his own originals as well as covers of classics.

In 2002, Philip formed his own company to specialize in providing entertainment and production for Fortune 500 companies. In the ensuing years, Philip has become one of the most highly regarded and successful entertainers in the corporate entertainment market, both as a solo artist and with his world-class band. Philip and his band travel extensively across the US and around the world. Corporate client program performances have led to traveling to South Africa, Beijing, Singapore, Venice, Sweden, Switzerland, London, Monte Carlo, France, Vietnam, Hawaii, the Bahamas, Puerto Rico, The Dominican Republic, Mexico, Canada, Alaska, Spain, Bermuda, the U.S. Virgin Islands, and dozens of top resorts in the United States.

In addition to his work on the performance side of programs, Philip also has a passion for production work as a creative director and producer. He partners with several highly regarded production companies to produce large-scale concerts and events for companies and professional sports entities. 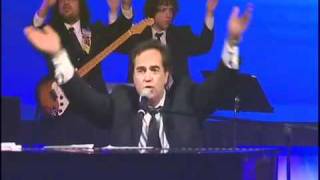 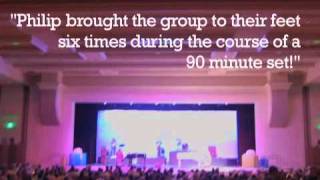 A Musical Tribute to Elton John and B...

A Musical Tribute to Elton John and Billy Joel
This is a high-energy show featuring the music of the two most successful pianists/singer-songwriters of all time. This musical journey will have the crowd on its feet singing and clapping along to the timeless hits of these two great artists. Classic songs include Piano Man, Bennie and the Jets, My Life, Crocodile Rock, Your Song, Philadelphia Freedom, Scenes from an Italian Restaurant, Candle in the Wind, Tiny Dancer, New York State of Mind, and many others. This show can be tailored to fit any size audience, and can include full production and videos.

Philip Myers Solo Performance
Philip's voice and his rapport with the audience are showcased in one of his most requested shows. Accompanied by piano, Philip performs the songs that have become his signature pieces in his many years of performing globally in the corporate market. Songs include "Music of the Night", "All I Ask of You", "Walkin' In Memphis", "Your Song", "Can't Help Falling in Love"…along with his Patriotic Medley and highly popular encore, the Italian "Con Te Partiro" (Time to Say Goodbye).

Intimate Acoustic / Singer-Songwriters Show
This show is built around the music and artists that have influenced Philip's career. He shares anecdotes and performs songs of the musicians who have inspired him. Backed by guitar and piano, Philip shares stories about life on the road with some of these artists, along with moving performances of their hits. Artists include: Elvis Presley, John Denver, Frank Sinatra, Johnny Cash, Garth Brooks, Vince Gill, James Taylor, Elton John, Kenny Rogers, Ray Charles, and Billy Joel and others. The audience will want to sing along to these timeless classics.

Philip also performs this show as a solo act, accompanying himself on guitar and piano.

A Tribute to Broadway

A Tribute to Broadway
Philip's incredible voice is showcased as he and a female vocalist bring the Broadway stage to life with this tribute, featuring many all time favorite Broadway "showstoppers". Hits include selections from Cats, Phantom of the Opera, Les Miserables, Lion King, South Pacific, Evita, Jekyl and Hyde, Man of La Mancha, Joseph, Carousel, and Jesus Christ Superstar, among others.

Other Options
Rockin' the Eighties
This show celebrates one of the greatest decades of music. The Philip Myers Band joined by special guests perform many of the chart toppers from the decade of the 80's. Special guests include: the lead singers from Journey (Kevin Chalfant), Toto (Bobby Kimball), Santana (Alex Ligertwood) The Fabulous Thunderbirds (Kim Wilson) Tommy Tutone (Jim Keller), and the Beaver Brown Band (John Cafferty). These guest artists perform their greatest hits backed by the Philip Myers Band. Videos and graphics fill the screens as the audience sings along to these timeless classics from the 80's.

Philip Myers Dance Band
The Philip Myers Band energizes the crowd with the top hits from rock, Motown, soul, funk, hip hop and top 40. This eight piece band is the perfect choice for Awards Banquets, sure to pack the dance floor for hours.

If desired, the band can function as the awards "pit band" and play specially selected songs for winners as they receive their awards. Non-stop fun and a great way to wrap up a special night for the attendees. Featured artists include Earth, Wind and Fire, K.C. and the Sunshine Band, Bruno Mars. Pharrel Williams, Aretha Franklin, Prince, Michael Jackson, Adele, Journey, Stevie Wonder, and many more.

Rock Anthem Show
The Philip Myers Band has performed this high-energy show in China, Vietnam, Europe, Canada, Puerto Rico, the Virgin Islands, the Bahamas, Las Vegas, and many of the top resorts in the U.S. Rock Anthem showcases many great classic rock songs from the past four decades of music. These selections are international hits, including many chart topping songs from the greatest rock bands of the 60's through the 90's. This show includes Long Time by Boston, Jump by Van Halen, Any Way You Want It and Don't Stop Believin' by Journey, Come Sail Away by Styx, With or Without You by U2, Lady Madonna by the Beatles, Sister Christian by Night Ranger, Takin' It to the Streets by the Doobie Brothers, and many others. Showcased in the performance are tight vocal harmonies and outstanding instrumental solos by the bands' world-class musicians.

Dueling Pianos
A high-energy, fun and interactive show that is sure to get everyone on their feet. Rock and Roll to your favorite songs, including Jack and Diane, Crocodile Rock, Sweet Caroline, Piano Man, Take It Easy, Sweet Home Alabama, Great Balls of Fire, Old Time Rock ‘n Roll, Joy to the World, Brown Eyed Girl, Bennie and the Jets, Don't Stop Believin' and others. The audience will be clapping and singing along to these all-time classic hits.

Then & Now (custom show)
Designed by Philip Myers especially for the Fontainebleau, Then and Now is a 90 minute fast-paced, high energy custom show that pays tribute to the special place in history held by this landmark property. The audience is swept through the music and events of the decades of the Fontainebleau, through the use of large screen video clips and early vintage photos of past and present celebrities and VIP's who have frequented the Bleau. These serve to light up the room as an impressive backdrop, highlighting the glamour and luxury that is synonymous with the Fontainebleau experience. Film clips from the numerous movies which were filmed at the Bleau increase the audiences' appreciation for the role this iconic property has played in our collective culture. Philip and his band perform many of pop music's greatest hits beginning with the 50's on up to the music of today. One of the highlights of the show is a "duet" performed by Philip with Frank Sinatra, using an actual video of a Sinatra performance from one of his many performances filmed at the Bleau. Also included in the show are selections from the Beatles, Elton John, the Doobie Brothers, the Eagles, Michael Jackson, Santana, Coldplay, U2, Journey, and many others. Then and Now is a perfect way to simultaneously entertain your conference attendees while also enhancing their appreciation and experience of the spectacular Fontainebleau.

Journey Tribute featuring Kevin Chalfant
Journey is recognized as one of the most successful pop/rock bands of all time. The Philip Myers Band collaborates with special guest star Kevin Chalfant (who replaced Steve Perry as the lead singer in Journey) to create an evening of classic Journey and 80's hits. Kevin fronts this non-stop performance of tunes made famous by the iconic 80's band, interspersed with hits from timeless 80's artists such as Van Halen, Toto, Michael Jackson, Stevie Wonder, Santana, KC & the Sunshine Band, Billy Joel, Queen, Hall and Oates, Survivor, Lionel Ritchie, Prince, U2, and many others.