Infamous for his skewing of political figures, Little has charmed, amused, annoyed and lampooned politicians from here to his native Canada. He entertained at both of Reagan's presidential inaugurations and got to know the Reagan family very well during that time. President Reagan used to tell Little, "You do me better than I do."

Infamous for his skewing of political figures, Little has charmed, amused, annoyed and lampooned politicians from here to his native Canada. He entertained at both of Reagan's presidential inaugurations and got to know the Reagan family very well during that time. President Reagan used to tell Little, "You do me better than I do."

A master mimic of more than 200 voices, Little continues to impress throughout the world, with a constant touring schedule of the United States, Canada and abroad.

A professed classic movie buff, he's particularly fond of doing Alan Ladd (his childhood hero) and others who are no longer generally remembered, but Little has also latched on to Baby Boomer-friendly characters, such as Edith Bunker, Kermit the Frog, Robin Leach and Dr. Ruth Westheimer, to name a few.

Some of his favorite current impressions are of stars Arnold Schwarzenegger, Sylvester Stallone, Jack Nicholson and Clint Eastwood. "They're easy to do," he says. "They are larger than life.

"Little says, "an impression is what you think a person sounds like. It could be an exaggeration or a cartoon. It's your impression. I think of an impersonation as more of an exact copy. Knowing the person personally is not important; it's knowing the speech patterns and mannerisms [in order] to imitate the person the way the public sees him."

It took him seven years to perfect Frank Sinatra, but only several minutes to mimic Dr. Ruth.

The son of a doctor in Ottawa, Little started his "career" at the age of 12 when he answered back to his teachers in their own voices. Observing the teachers in action was infinitely more fun than paying attention to class work. To get dates, he'd find out the girl's favorite actor, then call her up imitating that actor's voice. Then when Little showed up, he'd say, "Sorry, Cary [Grant] can't make it." This stopped when a girl told him her favorite was Porky Pig.

Little's first appearances were in a small club in Canada. "I got booked into this place in Quebec, and when I started my act, I discovered that no one in the audience understood English. It was strictly a French-speaking audience." He figured he was dead until an inspiration hit him. "I did walks - Jack Benny's walk, Bob Hope's walk, John Wayne's walk. They all walk the same in any language," he recalls.

Impressions came in handy to Little, while working as a disc jockey and talk show host. During one April Fool's Day marathon, he had "Jimmy Durante" emcee the morning show, "James Mason" was a rock ‘n' roll deejay and "Elvis Presley" hosted an afternoon program. Like the infamous 1939 broadcast of "War of the Worlds," 500 autograph-hungry Elvis-believing fans besieged the station, thinking the King was really there. When they found out it was Little, the fans started throwing objects at him.

Still in his early 20s, Little was discovered while working in the United States. His friend, singer Mel Torme, then on the musical team of CBS network's The Judy Garland Show, asked him to make a tape. Instead of the usual impressions, Little did Fred MacMurray, Dana Andrews, James Mason and Van Heflin, "the kinds of people nobody did." Garland thought it was great and Little was signed to the show.

Appearances on TV variety shows starring Ed Sullivan, Jackie Gleason, Glen Campbell and Dean Martin followed, as well as on series such as Laugh-In, The John Davidson Summer Show and The Julie Andrews Show. Little also had his own variety show in the 70s and was the star of the TV show KopyKats. Little was a guest host early on for The Tonight Show, hosting 12 times. He quickly became a household name sitting in one of the Hollywood Squares and went on to do the Muppet Show.

Named "Comedy Star of the Year" by the American Guild of Variety Artists. The perpetrator of nine comedy albums and three HBO comedy specials, as well as Emmy-award winning special "Rich Little's Christmas Carol" with "W.C. Fields" as Scrooge, "Humphrey Bogart" as one of the ghosts and "Paul Lynde" as Bob Cratchit.

His latest appearance on HBO was as Johnny Carson in the movie The Late Shift, which dealt with the race to succeed Carson on The Tonight Show. Little has appeared on the daytime soaps The Young and the Restless and Santa Barbara. He has made dramatic guest shots on Fantasy Island, Chips, Murder She Wrote, Hawaii Five-O, MacGyver, Police Woman and Mannix.

In a GQ magazine fashion spread, Little was pictured as Richard Nixon, Jack Nicholson, Cary Grant, George Burns, Ronald Reagan and Humphrey Bogart. In an Oscar pre-cast of ABC's Primetime (with Diane Sawyer and Sam Donaldson) he spoofed classic movies, proposing how they would end with different casts, starring Little as "Bette Midler" for Scarlett O'Hara and "Arnold Schwarzenegger" for Hamlet.

Little's expert impressions have also been used seriously, such as the time he stepped in for stars who were unable to do their own redubbings on soundtracks. David Niven's vocal cords were gone due to illness in his last film, Curse of the Pink Panther; Peter Sellers himself was gone by the end of The Trail of the Pink Panther; so Little provided both voices for these films. The TV series Mickey Spillane's Mike Hammer needed voice-over narrations on three shows, but star Stacey Keach was unable to finish them. Little was called in to finish the job. He also did Gene Kelly for a Christmas special when Kelly lost his voice; and most recently, Ernie Borgnine for the animated "Cranky's Miracle" after he passed away.

In June 1998, Little's star was added to the Canadian Walk of Fame to go along with his current stars on the Hollywood Walk of Fame, Palms Springs Walk of Fame and Las Vegas Walk of Fame; one of the few, if not the only celebrity to achieve all four.

In January 2010, Little became a United States citizen where he can now vote for those politicos who he mimics so well. Unfortunately, his wife Marie passed away later that year. Little later created the Rich and Marie Foundation, which focuses on helping children, the homeless and animals in need. Rich is also very supportive of Wounded Warriors and causes for the armed services. He proudly has two daughters, Bria, who lives in Malibu, CA and Lindsay, who gave him his beautiful granddaughter, Alaina, who now lives in Las Vegas where he resides as well. When not working, he spends most of his time with his lovely girlfriend, Kerry, and one-eyed cat, T-Bo.

Little is still touring with his "Laugh A Little" comedy show as well as his self-written, one-man play, "Jimmy Stewart & Friends" across the country at performing arts centers to rave reviews. Little is currently writing a show about his life featuring over 30 characters, which he's planning to take on a US tour, including Broadway, in the very near future. 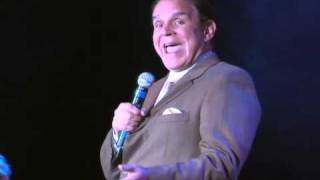 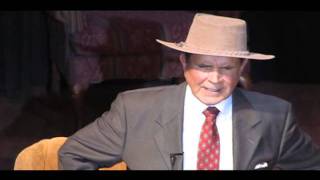 Celebrities I Have Known & Been

Celebrities I Have Known & Been
Take a stroll through the lives of the biggest Celebrity Icons in the entertainment industry with Rich Little. Rich is the "Dean of Impersonators" and will bring you Frank Sinatra, Cary Grant, George Burns, Tom Jones and many more of his 200 voices with stories that reveal the private real life experiences and secrets of celebrities.

Listen as Rich speaks in each celebrity voice to take you on a journey in life that made each and every one of them famous.

This exciting evening of entertainment and laughter is not your typical boring speaking lecture; it includes music, singing and Rich's adventures in the colorful world of Hollywood no one can match.

His 70 minute performance of celebrities coming to life right before your eyes is full of non- stop laughter and information on behind the scene life events of the famous Icons showing you what their lives were really like and how they became successful in Hollywood.

Doors of the lives of celebrities will open for you to experience their interesting encounters in the entertainment world.

Rich allows you to hear and see another side of Hollywood celebrities and you will feel as though you actually know them.

You don't get a little; you get Rich Little and 200 celebrities for the price of one!