Often compared to a contemporary Abbott and Costello, Kim Thomassen and Gust Alexander were two junior high school buddies from Minneapolis who liked to make each other laugh.

Today, under the playful moniker "The Stagebenders." Thomassen and Alexander are America`s top comedy duo, playing to sell-out crowds and rave reviews.

Read More
The Stagebenders Profile
Often compared to a contemporary Abbott and Costello, Kim Thomassen and Gust Alexander were two junior high school buddies from Minneapolis who liked to make each other laugh.

Today, under the playful moniker "The Stagebenders." Thomassen and Alexander are America`s top comedy duo, playing to sell-out crowds and rave reviews.

The Stagebenders` act is a nonstop, fast-paced hurricane of interactive comedy that has to be experienced to be believed. Once they whip their audience into a comedy frenzy, no other comic dares perform after them.

Die-hard fans include Geena Davis, The Kinks and the legendary Budd Friedman ( the Stagebenders headline regularly at "Improvs" all over the United States ). TV and film appearances include The Tonight Show with Jay Leno, ABC`s America`s Funniest People, MTV`s The Jenny McCarthy Show, TREKKIES 2, and the Coen Brothers` The Naked Man. They have been featured in national publications such as Esquire and - believe it or not - Mechanical Engineering.

In addition to headlining at Harrah`s Las Vegas every Thanksgiving and Christmas, the Stagebenders have performed countless shows for a variety of Fortune 500 companies, including AT&T, MCI, Honeywell and Frito Lay.

After fifteen years, their act has been honed to perfection. Their current project is The Stagebenders TV Show, a scripted, half-hour sitcom. If it leaves the audience anywhere near as frenzied as their stage show, even Abbott and Costello wouldn`t want to follow them. 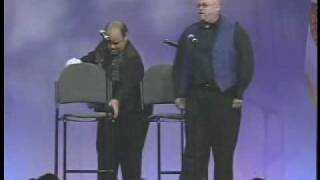 STRAIT IMPROV
A non-stop, fast paced hurricane of interactive comedy. Spontaneous, clean and uplifting delivery that is tailor-maid for your company! Their physical sketches, songs, and one-liners will incorporate the objectives and specifics of your business to produce an event your organization will never forget! Your staff will get invaluable benefits...disguised in boisterous comedy!

CORPORATE SEMINAR
Why sit and listen to a speeker when you can get up, move around and have a great time!? To experience a Stagebender Corporate Seminar is to have an afternoon of fun and creativity. These corporate workshops are based on theater exercises and improvisation games designed to help with communication and interaction skills. The Stagebenders will work with your company to develop a curriculum that is unique and tailored for your employees. It's a free day of having fun, while working on a positive interaction, cooperation, listening skills. creativity and self-esteem!